Species and range evolution in Amazonian amphibians
Since 2002

It is challenging to explain amphibian history and diversity in Amazonia. Our molecular-, field- and model-based research on amphibians contributes towards a better understanding of the role of e.g. the various modes of dispersal or how secondary contact contributes to evolutionary change within or between species. A particular research focus are on 'floating meadows' on the Amazon river and its tributaries.
Taxonomic key groups are poison frogs (Dendrobatoidea) and harlequin toads (Atelopus). 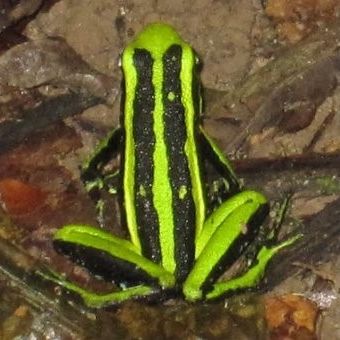 Photo: Ameerega trivittata, a fellow
found over most of Amazonia.
By Denise J. Ellwein

Harlequin toads (Atelopus) greatly vary between cryptic and brilliant colorations and some just have flashing red hand and foot soles. All Atelopus are toxic. They contain tetrodotoxin (TTX) which is puzzling, as this highly venomous substance is, other than in amphibians, known from many marine organisms (including puffer fish, a delicacy in Japan). We study the evolution and function of visual conspicuousness with regard to toxicity. Part of our field experiments use differently colored clay models of toads. 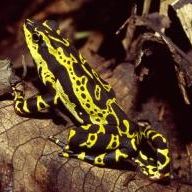 Predator-prey relationships inferred from attacks on artifical prey
Since 2016

Predator-prey interactions are a vast field in ecological research and many mechanisms thereof are crucial to understand natural selection, trait functions, cognition of traits and hence their evolution. However, for many taxa predator-prey interactions are difficult to study because field observations of predation events are rare. Predation is based on perception of stimuli, in many cases visual cues.
To understand the effects of different visual cues on predation, such as coloration or patterns of prey animals, we use artificial prey to collect information. We mainly work with European land salamanders but have also collected data on Neotropical harlequin toads (see above). In a recent study we were able to demonstrate that potential predators leave DNA on clay models that helps identfying them. 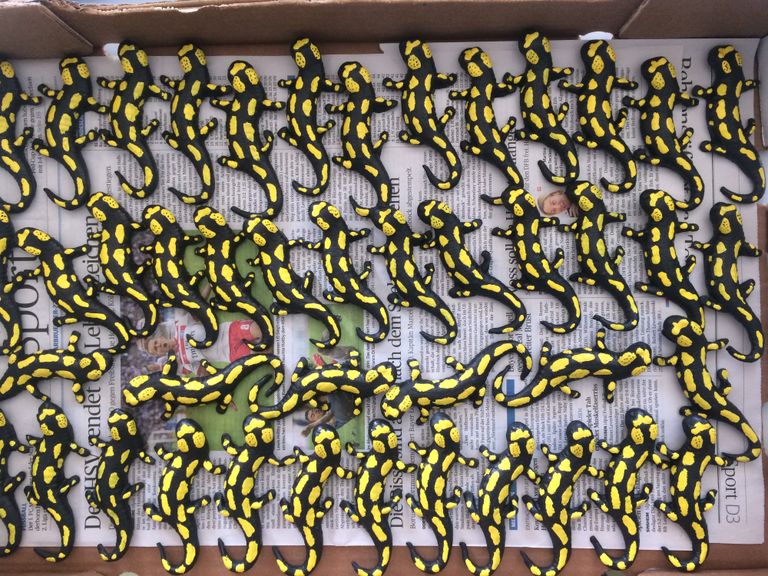 Photo: A 'battery' of fire salamander
clay models ready to be place in the field.
By Stefan Lötters

How do emerging infectious diseases affect amphibian diversity?
Since 2016

Emerging infectious diseases are one of the main threats to global biodiversity. Amphibians, a group severely declining at the global scale, suffer from spreading fungal diseases, in particular the amphibian chytrid fungus, Batrachochytrium dendrobatidis (Bd). We have studied this pathogen in the wild in the Alps and in East Africa and have made a risk assessment for all global amphibian species, based on distribution models.
Some years ago, a new amphibian skin fungus, Batrachochytrium salamandrivorans (Bsal), was discovered in western Europe. It is lethal to many salamander and newt species (not so to frogs and toads or caecilians, as far as we know), and our native amphibian fauna is at high risk of extinction. Our studies mainly focus on how the new fungus, which might have originated in Asia (where asymptomatic species have been found), spreads and how it affects populations in the wild. In 2015, we have recorded it for the first time in Germany (see below: Spitzen-van der Sluijs et al. 2016). For some years now we have witnessed a significant spread of Bsal in parts of Germany along with dramatic declines in fire salamander (Salamandra salamandra) populations. Newts are also affected in the wild but apparently can cope better with the fungus. An exception might be the norther crested newt (Triturus cristatus), but further research is needed.
For more information see a film made by students from Trier University. The recent knowledge on Bsal in Germany was summarized in a thematic issue of SALAMANDRA, published 15 August 2020.